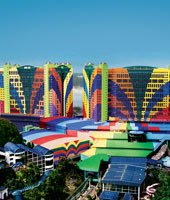 Malaysia's Lim Goh Tong, a casino owner and contractor, turned his idea for a hilltop resort on the outskirts of Kuala Lumpur into one of the world's most successful casinos.


The Genting Highlands Resort is also home to a 500,000-square-foot theme park and the 6,000-room First World Hotel. The outside of the hotel looks as if it has been scribbled on in crayon; the inside lobby has a tropical rainforest and spacious Spanish courtyard.

Billionaires own stocks, bonds, real estate and art. Many also have their own collectible cars, mega-yachts and private planes. And some own hotels. Nice ones.

Hotels come in handy, and they can quickly increase in worth. Ten years ago, for instance, Saudi Arabia's Prince Alwaleed Bin Talal Alsaud paid $150 million for the Four Seasons George V in Paris. A recent independent valuation now pegs it at $750 million.

A hotel can also be a billionaire's own swanky retreat. Swiss billionaire Karl-Heinz Kipp, who in 1985 sold the Massa retail chain he founded, now lives part-time at his Tschuggen Grand Hotel in the Swiss Alps. Pretty soon, he might want to lengthen his stay. After all, he is adding a $27 million spa with a special top floor that will offer a "program of seasons," including a "winter storm" and a "summer sunshine."

Billionaire hotels span the globe from Barbados and St. Moritz, Switzerland, to Gambia, West Africa, and the outskirts of Kuala Lumpur, Malaysia. They also offer tastes of the billion-dollar lifestyle. At the Kona Village Resort, owned by American billionaire and Beanie Babies founder Ty Warner, guests can sip Mai Tais by the pool after a nap at one of 125 private thatched-roof cottages. At Donbass Palace in Donetsk, Ukraine, owned by Ukrainian steel and coal magnate Rinat Akhmetov, a vacationer can splurge on a $3,000-a-night executive club suite.

Some of the billionaire hotel hideaways have a rich historical tradition. The Monkey Island Hotel, which began operating as a hotel in 1840, is owned by Khalaf Ahmed Al Habtoor, a construction baron from the United Arab Emirates whose net worth is valued at $2.3 billion. Located on its own private island in the middle of London's Thames River and accessible only by footbridge or boat, the hotel's name dates back to 12th-century monks who are believed to have used the island for fishing (think monk-y not monkey). In the 1700s, the ceiling of its Monkey Room was painted with monkey images. Queen Alexandra began a tradition of royalty visiting the hotel when she had tea on the lawn with her children at the turn of the 20th century.

German SAP co-founder Hasso Plattner's Fancourt Hotel and Country Club Estate in George, South Africa, is so old--it's been operating for 147 years--that it's inspired legends: Lore has it that some of the previous owners are now ghosts of the resort.

Click here to see the world's 11 most fabulous billionaire-owned hotels.

The 263-room Novotel is scheduled to open in 2008 as an important component of 1 Borneo, Kota Kinabalu’s largest lifestyle mega mall that will include a 600 outlet retail shopping complex, residential condominium and office tower. The development is adjacent to Kota Kinabalu’s industrial Park, University Malaysia Sabah Polytechnic School and 15 minutes drive from the airport.

Mercure Waterfront, Kota Kinabalu will be an important part of the Waterfront development, considered one of Kota Kinabalu’s up-and-coming entertainment and shopping districts. Built on prime seafront land it will offer sweeping views of both the ocean and mighty Mount Kinabalu.
The hotel is scheduled to open in November 2006 with 212 guest rooms, 2 meeting rooms, a coffee shop, lobby lounge and bar, swimming Pool, fitness centre and state-of-the-art spa.

“These hotels are in two of Kota Kinabalu’s fastest growing areas and are poised to become exciting business, nightlife and shopping districts. They both have broad appeal for either corporate and leisure visitors, making each hotel more attractive to a wider clientele.”

Novotel 1 Borneo, Kota Kinabalu strengthens Novotel’s position as the leading four-star international hotel in Asia Pacific. It is fast becoming the first choice brand for a growing number of travellers and international visitors attracted to its reputation for quality and value for money accommodation.”

Novotel is the world’s most renowned “business class” of hotels, with over 400 hotels, including over 72 around Asia Pacific, located in major city, regional and resort locations.